How to Analyze Financial Reports

How to Analyze Financial Reports

If you think that the accounting practices permitted under GAAP — generally accepted accounting principles — are established and consistent, you can certainly be forgiven. The very name, containing as it does the innocuously conservative-sounding phrase “generally accepted,” seems to offer assurances. Unfortunately, GAAP contains far more leeway than it might seem, and many public companies take full advantage of what can be generous limits in order to make their financial pictures look as rosy as possible. Conversely, in some cases GAAP-compliant financial statements make a company look weaker than it actually is.

Invest Automatically with Acorns 📈
With Acorns you can start investing with as little as $5 by automatically rounding up spare change. Plus, you'll get $10 completely free when you use the link below to get started!
Sign Up Now!
Disclosure: This link is an affiliate link, meaning, at no additional cost to you, I will earn a commission if you click through and make a purchase. 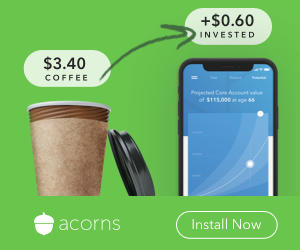 All too often, investors consider a single “headline” number — with earnings per share or EPS leading the pack — and make a decision on that basis. EPS tends to be heavily reported in the financial news media exactly because it is a single easily understood data point with an obvious trend from quarter to quarter and year to year.

Doing so is, to be blunt, a horrible idea. You need only stop to consider that numerous companies have taken advantage of the unusually and frankly abnormally low price of credit to buy back their own stock. Why put money toward risky capital investment, research and development, or new products or services to boost the company’s earnings when instead you can reduce the float (number of shares available for trading) and automatically increase EPS even when earnings are flat or declining?

This is but one simple example of how a company can manipulate its financials to portray overly flattering results. The sad fact is that there are many, many ways to subtly distort financial reporting. The even sadder fact is that often companies don’t even work that hard to conceal those distortions.

Let’s consider the poster child (or whipping boy, more accurately) for shady financial reporting: Enron. While today the widely held public view is that Enron’s malfeasance was obvious, in fact federal prosecutors worried as they sought to build cases against senior executives such as chairman Ken Lay and CEO Jeffrey Skilling. Writing for the New York Times in 2006, Alexei Barrioneuvo and Kurt Eichenwald revealed that “some prosecutors privately worried that they would never even be able to charge Mr. Lay with any crimes.”

The reason is that, as Harvey Silverglate describes in his 2011 book Three Felonies a Day: How the Feds Target the Innocent, Enron had disclosed its “aggressive” accounting practices, including the transfer of non-performing assets into the infamous off-balance-sheet “special-purposes entities,” in the footnotes to its financial statements. Jonathan Weill of The Wall Street Journal examined Enron’s accounting practices in July 2000 and discovered how much of Enron’s reported income was “unrealized.” Financier James Chanos, motivated by Weill’s reporting, also took a closer look and decided to short Enron’s stock. Even as far back as 1998, six Cornell business students had analyzed Enron as a class project and concluded that the company was badly overpriced, recommending it as a “sell.”

In other words, even the ugly truth about Enron was there years before the company imploded for those patient enough to dig into the financial statements and perform some analysis.

Unfortunately, we don’t have the space here to examine the many different analysis points that can be applied to a company’s financials. What we can do is (1) provide a summary of the major indicators in five different functional areas and (2) dig more deeply into one very significant indicator that is among the most difficult to distort.

A company’s three financial statements (income statement, balance sheet, and cash flow statement) provide data for about 40 key performance indicators. They are listed here by functional area with a very brief description of how to calculate and evaluate them.

It is very important to understand that ratios should be compared only within the same industry and that relative, not absolute, performance is important. (Comparing Ford to General Motors — absolutely. Comparing Ford to Verizon — not a good idea.) Also, never take an indicator from a single point in time. Instead, evaluate the trailing three to five years (three is generally sufficient since market and macroeconomic conditions can change significantly) and consider the trend. If you were to look at just one year and happened to pick an unusually good or unusually bad one, you would get a distorted result.

Most stock research resources such as those provided by online brokerage services will put much of the information you need in one place. For example, the screenshot below shows some of the key operating profitability measures for Ford compared to the average for its industry (Automobiles, in this case).

To reiterate, when looking at something as complex as a public company’s financials, there is no one simple ratio or number (or even a few numbers) that will tell the entire story. (If that were the case, investing would be every so much easier.) However, there is one financial statement and one aspect of a company’s financial results that is harder to distort and provides the best insight into its performance and prospects.

Perhaps you’ve heard the express “Cash is king.” There’s a good reason for that. A company can manipulate profits with aggressive accounting, and there are even ways to play some games with sales, but cash in hand is cash in hand.

Let’s consider some examples. We’ll start with Sprint (S), the most troubled of the large wireless carriers. As the income statement extract below shows, for the most recent reported quarter (Q1 FY 2020 ended 6/30/19), Sprint had a net loss after taxes of $114 million on revenue of $8.142 billion.

However, Sprint actually burned through $2.111 billion in cash in the quarter.

Operations (that is, Sprint’s normal business) produced $2.244 billion in cash (highlighted in blue below), mostly because depreciation (in green) is a non-cash item and so is added back to net income (in yellow).

However, Sprint invested $2.705 billion in fixed assets (predominantly network buildout, highlighted in yellow below) and paid off debt of $1.858 billion (in green), so investing and financing activities respectively used up $2.468 billion and $1.887 billion, producing the net negative change in cash of $2.111 billion. 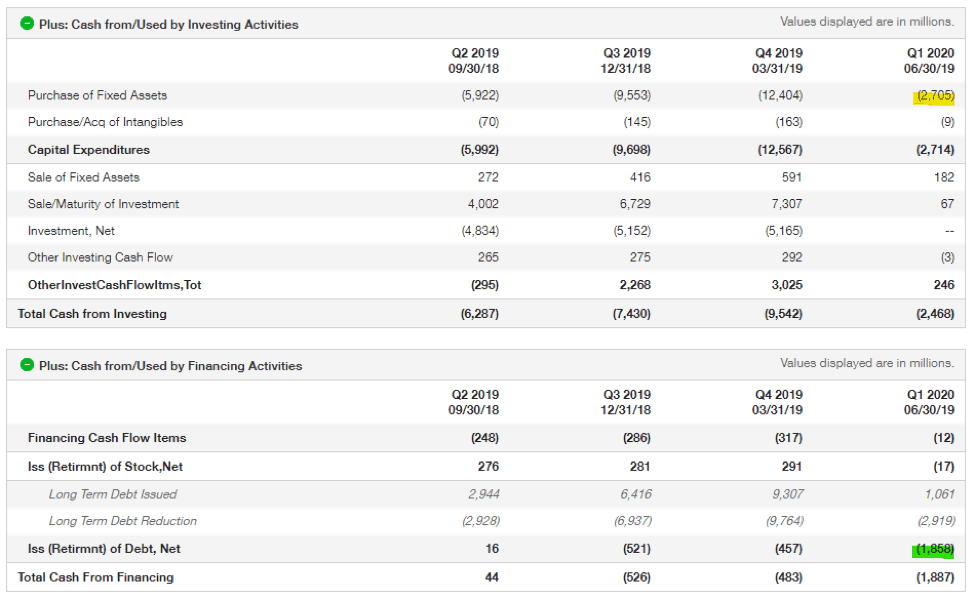 Let’s look next at Boeing (BA). Over the last four quarters, the company has seen net income (in yellow) decline significantly. It has spent heavily on inventory (usually raw materials in the case of a manufacturer like Boeing) (in green), which in concert with other factors has caused its total cash from operations (in blue) to suffer. It is likely that Boeing has continued contractually obligated purchases of materials from its suppliers even as orders have slowed thanks to the controversy over the 737 MAX.

Net change in cash (highlighted in blue below) has steadily improved, but closer examination shows that this is because Boeing has shifted from paying off debt (nearly $12 billion net in Q4 2018 and nearly $3 billion net in Q1 2019, in yellow) to borrowing, issuing almost $20 billion in debt for Q3 2019. 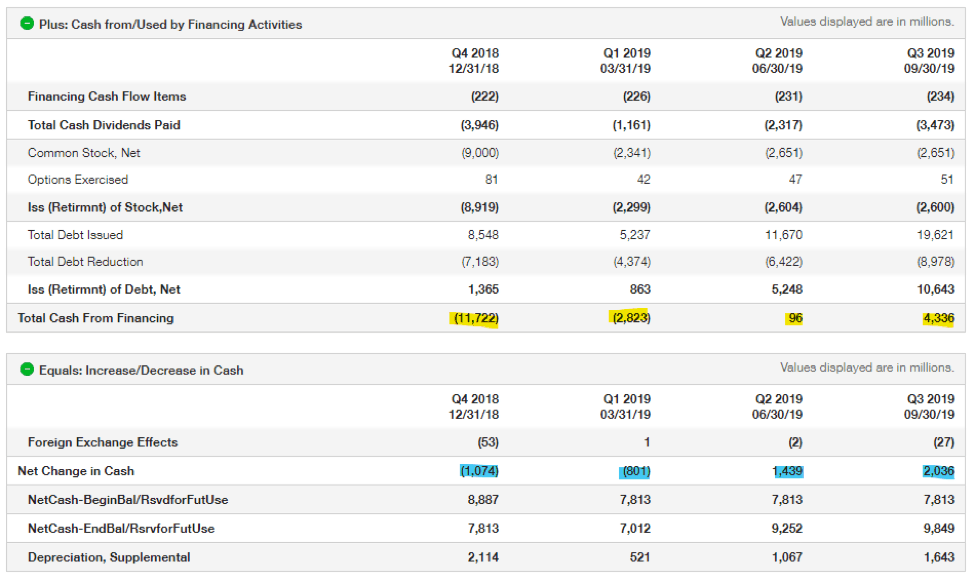 One lesson you should take away from these illustrations is that even a headline cash flow number can be misleading. Looking at nothing but Boeing’s net change in cash for the trailing four quarters would show steady improvement, but the truth is that net income from operations dropped off a cliff in Q3 2019, and net cash flow was strong only because the company borrowed nearly $20 billion.

In the case of Sprint, while weak cash flow is not a good sign, the one positive is that Sprint is investing in its network, which is a competitive necessity. It is also paying off debt, and while that is generally a good thing, given the need to expand 5G coverage it would be better to see Sprint borrowing to build out more quickly. Looking closely at its long-term debt issued and retired, it becomes clear that Sprint is engaged in relatively short term borrowing to cover its maturing debt, which begs the question of whether the company is able to borrow at competitive rates.

Financial statement analysis requires time, patience, and critical thinking. As we demonstrated, even with a financial black hole like Enron, the evidence of the company’s actual financial condition was there for anyone ready to dig deeply enough. Understanding what numbers can be manipulated and where on the financial statements those manipulations will appear, as well as keeping in mind the importance of examining trends, will take you a long way down the path toward skilled financial analysis.

You can learn more about investing, the stock market, and corporate finance here and be sure to subscribe to our email list below!

Keeping you informed about the latest in personal finance, investing, and more!
Make Money:
How to Make an Extra $500 a Month
How to Make $50 a Day
Best Passive Income Apps
How to Get Rich from Nothing
Get Free PayPal Money Instantly
Save Money:
Cheap Foods to Save Money
How to Drastically Reduce Expenses
How to be Fiscally Responsible
Investing:
Best Compound Interest Accounts
How to Make Your Money Work For You
Top Appreciating Assets to Grow Wealth